And how do you sleep? 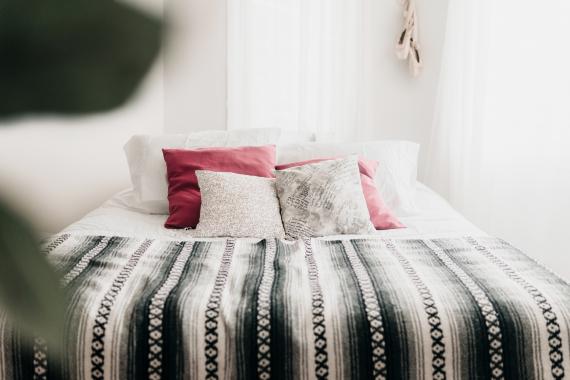 On your back, on your side or on your stomach? With an open window with fresh air? Are six hours of sleep enough for you or do you need more? Do you fall asleep as soon as you lie down? Or do you even sleep best while sitting, during a long car or bus ride?
We all have one thing in common - a bed with a comfortable mattress, which may be a little more solid for some, a little softer for others.

In other cultures, there are countless other sleeping positions or sleeping bases. Like their cultures and languages, sleeping habits in other countries around the world have developed quite differently from ours.

On the one hand, access to sufficient artificial light influences sleeping habits. In some countries, where the lack of artificial light causes people to sleep immediately after sunset, the boundary between sleep and wakefulness is blurred by waking up at night and the irregularities of nature. In our culture, on the other hand, constant access to light means that people go to bed later and usually sleep longer in the morning. This also influences i.e. our social activities, usually postponed to the evening hours, which is a sign of personal freedom, especially for young people.

However, sleeping habits are not only adapted to such conditions, but also to the place, i.e. the geographical location. A distinction is made between hammocks, the floor, towels, platforms and beds, as well as sheets, wool blankets and duvets and the use of a pillow. Hammocks are mainly found in South America; for us that sounds like vacation, relaxing on hammocks between palm trees. For the inhabitants, it is the everyday life, and the hammocks serve a special purpose: the high temperatures require a good ventilation of the sleeping place, and at the same time the airy height keeps the vermin away from the ground.

It is similar in India, where people sleep on the so-called Charpai, a simple bed frame on four high legs, which is tightly covered with fabric belts or ropes and thus reminds of a hammock. The fact that type and quality of the mattress or other sleeping surface are not only a question of money, but also a question of habit and above all of tradition, is shown by the example of the indigenous people around the Amazon, who sleep only on a blanket or woven mat, without pillows and under the open sky. In Japan, a similar sleeping place can be found, where a mattress is placed on the floor and a duvet and pillow are used to sleep. During the day, the bedroom is used as a living room, so the futon is rolled out every evening and urolled and stored away every morning. In China, too, people like to lie on a harder surface. Here it used to be customary to lie on a kind of oven bed, a brick surface under which there was heating. Any upholstery would have only reduced the warming effect. What has remained to this day is the preference for a very solid sleeping surface. In China and Japan, by the way, sleep is divided into several phases over the day and night, whereas in Europe and North America sleep only takes up one longer phase.

Conclusion: Various factors influence sleeping habits all over the world. Particularly climatic conditions and traditions, but also differences in the social environment determine the type of sleeping place and habits such as the time of going to bed or the duration of sleep.

Aren't we happy to get back into our comfortable bed with blanket, pillow and everything else that goes with it and sleep peacefully until morning?